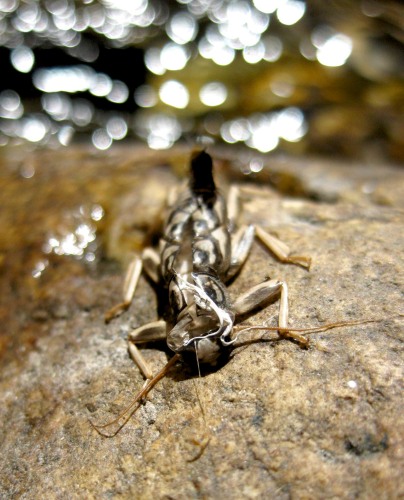 Above, another picture from our recent trip to El Boca del Asno. When you get down to rock and water level, nature is quite endlessly surprising!

Right, what I want to talk about: In the Boca del Asno post, I wrote the following…

…as usual so many people stick close to the car park, that within a few minutes walk up the river, you find yourself with plenty of riverside space…

But what I nearly wrote quite automatically was “as usual the locals stick close to the carpark”… until I suddenly realised how totally ‘us and them’ the locals sounds.

Hang on, I thought, I’ve been living here for nearly 13 years, I’m married to a Spanish woman, most days I’m fluent in Spanish, I eat, live, and pay taxes in Spain, hang out with Spanish people all day long, my son is going to a Spanish school… how on earth can I keep on talking about ‘the locals’ when I am one!

I may not be Spanish, but I certainly can’t continue to set myself apart from the Spanish by using language like that anymore, that much became totally clear in the instant I was about to write about ‘the locals’ again.

Maybe it’s just that I’ve become a local after all this time, or, more importantly, allowed myself to feel like one.

Perhaps the key question then is ‘How long does it take to really feel like one of the locals?’… and in my case, despite the fact I’ve been totally happy and integrated here in Spain for so long, the answer to that exact questions looks ridiculously long at ‘about 12 and a half years’!

Do you feel like a ‘local’, if you aren’t living where you originally came from, did it take you long to become one, will you ever become one? Answers welcome in the comments!