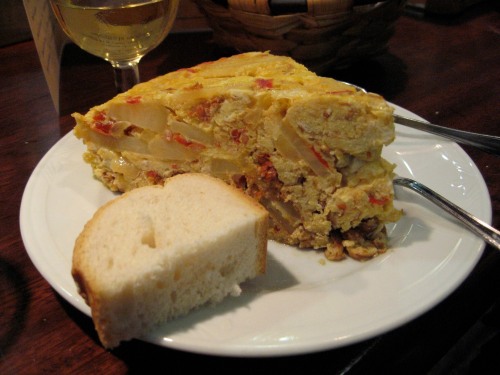 I just popped out to a favourite local bar, where my favourite barman, super-friendly, 50-ish, thick white hair and humour as dry as a brick, brings in his home-made tortilla every day.

I’m not fond of microwaved tortilla, so usually add this specific request.

‘Si si,’ he replied, followed by some incomprehensible mumbles, and two minutes later, I was presented with an enormous slab of steaming microwaved Tortilla.

Damn. At this point it dawns on me that the mumbles I’d missed in his earlier reply must have been something like ‘Si si,…but you can’t eat it cold, it’s much better heated up.’ Subtext: you don’t know what’s good for you, I’ll bring you your tortilla how you really want it, piping reheated-hot!

Now, if I was Spanish enough, I would a) have complained at this point and demanded what I’d asked for, namely cold tortilla, and I suppose b) understood what he’d mumbled in the first place! I like to convince myself that after 11 years I’m pretty much 99% bilingual in terms of understanding spoken Spanish, but this guy’s mumbles cause me no end of trouble!

The real issue here though, is the incredibly well-intentioned ‘you don’t know what’s good for you’ subtext that led to the hot tortilla (which was very nice in the end, of course). It happened earlier in the year when I was in the same bar with my father.

‘Ha, yeah, right!’ he answered, with a look of wry disbelief on his face, ‘Jamon iberico and cheese in the same peice of bread? Are you mad? Jamon York and cheese yes, but certainly not Iberico! There are some things you just don’t do!’

‘Errr, a jamon iberico bocata and a seperate plate of manchego cheese then?’ I ventured nervously…

‘Asi es, now you’re talking,’ he smiled, and that, of course, is what we ended up with.

The universe could rest in peace, things had been restored to how they should be. Iberian ham and manchego cheese together, yet separate, como Dios manda.

If I was just a little bit more Spanish after all these years of concerted effort, I would have know that in the first place!

Oh well, maybe after another 11 years…