1. I’m glad I don’t want an iPad. I can’t see it doing anything for my life that my Macbook doesn’t do already! And I still just love paper books, as opposed to the e-versions…

One thing that strikes me though: imaginary conversation 20 years hence…

Son: Dad, what did you do in the evenings when I was a baby?

Dad: Well son, like millions of others around the 1st world, I found that pretty much nothing beat sitting in front of the computer watching second-hand coverage of a sales pitch from a guy in jeans for a brand new shiny object that wouldn’t even be available for another two months, and I really didn’t need. Now that was the way to spend an evening!

2. My yearly ‘blogging crisis’ set in this month, when I have no idea what to write about any more – or, more to the point, I have had nothing to say about Spain for a while…

So I start thinking about starting other blogs, then procrastinate for 2 weeks, then watch a great video on why it’s bad to have too much choice, and realise having multiple blogs is a nightmare, and decide to keep on writing about whatever I like (not just Spain) here again.

3. Why, shockingly, do I occasionally have nothing to say about Spain for a while?

After eleven years, Spain spends a lot of time being my background, not so much the foreground any more. What does that mean?

When you first move to a new country, every sight, smell, meal, encounter, taxi ride, confused shopping experience, language cock-up, weekend road trip, every time you step out onto the street in fact, is a wonderful, wild adventure.

The new country and culture is in the front of your mind every second of the day, it’s the chief stimulant, a constant cafe solo, perking you up, setting your eyes sparkling as you continue to discover new delights.

If 2010 is the year you are thinking of moving to, or spending a long time in, Spain, then don’t hesitate. I have a friend who moved here recently, and after 4 months he still glows with the excitement of a new life abroad.

But after eleven years my relationship with my ‘new country’ has changed somewhat. The constantly new has become the happily familiar. What jumped out at me as ‘different’ for years, is now, except for when I’m travelling, quite normal.

Does that mean that life in Spain is suddenly dull? Not at all! On the one had in makes it harder to communicate the joys of this country to you with the same regularity, and the same perspective of discovery as before.

On the other hand, it means that Spain can now become the background to new projects other than just ‘Spain’, which was my chief preoccupation for so long.

Still thinking about that a lot, but…

I’ve had a two bad habits for most of my life. One, letting other people do most of life’s domestic stuff for me, if I see they don’t seem to mind, and I can be lazy about it. Two, having an encyclopaedic (British?) knowledge of things that are bad for you, but not spending enough time learning about what is actually good for you.

Doing more cooking helps with both of these. Regarding point one, by doing as much of the family cooking as I can, I can take a lot of the weight off my wife, giving her more freedom, while also dealing with point two: I want to understand healthy food, and see how it makes us healthier as we eat it.

So I’ll be cooking mostly vegetarian food, trying my best to source organic, ‘eco’ ingredients… which still isn’t as easy here as it is in the UK.

I have always, yet reluctantly, loved cooking, usually picking one dish and cooking it repeatedly for six months, until we are both so fed up with it, that I never cook it again.

When we first lived together, I cooked so much chicken for 6 months, that Marina couldn’t touch it again for nearly 5 years! (This was mostly because I couldn’t understand the Spanish names for all the different cuts of other meats, so I only bought chicken!)

6. Writing and recording more – but not necessarily about Spain.

Self-explanatory. Watch this space I suppose. We continue to record Spanish-learning conversations at Notes in Spanish, but I hope to write more here again, about all these projects!

I have an increasing interest in understanding the nature of the cosmos – life, the universe(s), etc. Perhaps it’s because I was afflicted early on in life with a philosophy degree. I find that reading Discworld novels helps. Well, I read two, and to my surprise, they were rather good. Third one on the way, to continue my cosmic education.

7.b. Who knows this lovely beach? 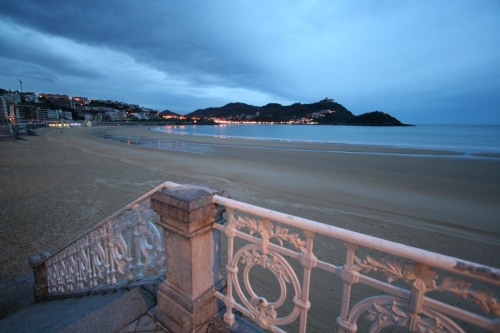 Speaking of reading, I’ve just finished The Pickwick Papers and Oliver Twist, both incredible. Despite having a fairly sophisticated culture and system of law, the Victorians really treated poor people and debtors like total sh*t. Inhumanely in fact, and Dickens portrays the horrors vividly (he’d experienced them first hand in earlier life).

But it makes me wonder: In 150 years, what will make people raise their eyesbrows in amazement when they read about social conditions in our times – what is normal to us now, but will seems absolutely unthinkable to them in terms of treatment of our fellow humans?

The fact that people are left to sleep on the streets perhaps, or overcrowding in hospitals … who knows…

This post breaks all good blogging rules by being too long, and covering multiple subjects. If you got this far, you are great 🙂 Comments are back on, they had to go off as the amount of email I was getting was detracting from my peace of mind! Please do comment if you like!

Delokos.org – Spanish site about vegetarian cooking. I met Eugenio over Christmas, a very lovely man with a total passion for vege food, that he passed on to me (see point 5 above!)

Spanish illness and doctor phrases and vocabulary – Fun bit of audio at notesinspanish.com