Notes from Spain is all about bringing you closer to the wonderful experience of life and travel in Spain. Our podcasts, photos, articles and video cover all aspects of Spanish culture, and some of the most interesting destinations, fiestas, beaches, landscapes and towns around Spain.

Ben Curtis and Marina Diez live in Madrid, and started the Notes from Spain blog and podcasts in 2005. They also run Notes in Spanish, a Spanish learning site focusing on authentic, real Spanish conversations. 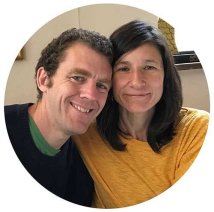 Ben…
Ben has lived and worked in Madrid since 1998. He is a travel broadcaster and editor, and has previously worked in Spain as a bilingual translator and teacher. Recent projects include work on Fodor’s Spain Gold Guide, the BBC’s Olive Magazine, podcasting from Spain, India and Thailand for Lonely Planet, researching the Home and Abroad Madrid Guide, and appearing on Classic FM. He has also written in Spanish for Solo Moto 30, a Spanish motorbike magazine. You can read all about his first years in Spain in the travel classic Errant in Iberia.

Marina…
Marina, a true Madrileña, originally worked as an IT consultant for international tech. companies, and now works full time on Notes from Spain and Notes in Spanish. As well as being the Spanish speaking expert behind our Spanish podcasts, her love of Spanish Cuisine provides the inspiration for our Cuisine from Spain programs.

Notes from Spain content has also been syndicated to: